Sixty-two years after La Stupenda’s Covent Garden debut, another young soprano from Down Under is in London in search of operatic stardom. 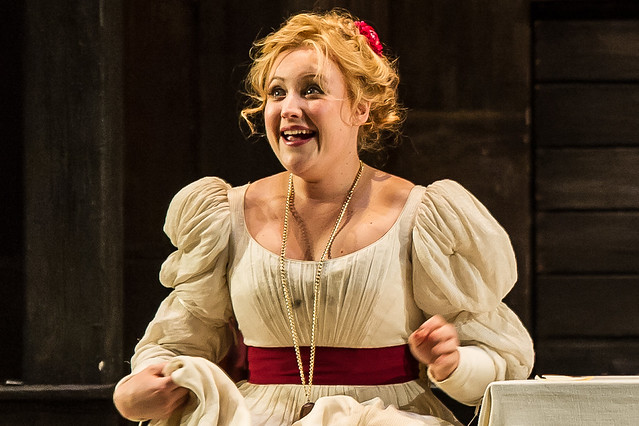 ‘I think I was about nine when I saw my first opera. It was a performance of Tosca and I turned to my mum and said “That’s what I want to do!”’

With the support of her family, Kiandra Howarth went on to fulfil her ambition of becoming an opera singer. The soprano joined the Opera Queensland and Opera Australia young artist programmes in 2011 and 2012 respectively, before moving to Austria for a one-year intensive study programme at the Mozarteum in Salzburg. It was during this year that she found out about The Royal Opera’s Jette Parker Young Artists Programme from a fellow singer. Kiandra successfully auditioned for a place and moved to London in 2013.

‘The Jette Parker Young Artists Programme offers so much - we have coaching on basically anything we want, like languages, stagecraft, and movement,’ explains Kiandra. ‘It’s quite different from programmes I have done before in that as well as performing small roles we also get to understudy some of the major roles. This season I am covering Mimi in La bohème which is being sung by Anna Netrebko. It’s absolutely amazing to be able to watch people like that and learn from them.’

Now in her second year of the programme, the young soprano has already appeared in Parsifal, Die Frau ohne Schatten, Ariadne auf Naxos, and in this Season’s Rigoletto.

‘A highlight so far was working alongside Karita Mattila in Ariadne auf Naxos; she was Ariadne and I was Echo. Karita is someone I have admired and looked up to since I was in my teens, so to work with her – and to find out that she is this lovely, down to earth person – was amazing.’

Kiandra is currently in rehearsals for Laurent Pelly’s acclaimed production of Donizetti’s L’elisir d’amore which opens at Covent Garden later this month. She will play the young farm girl Giannetta in a cast including Bryn Terfel, Lucy Crowe and Vittorio Grigolo.

‘I love this production because it’s different to any other show I have been involved in at the Royal Opera House. There are a lot of physical things happening on musical cues, so at first it’s quite confusing trying to sing whilst you are also doing all this choreography. Rehearsals are going well though and I am really enjoying working with all the cast.’

Kiandra will also be in the cast for the live relay of L’elisir d’amore, part of the Royal Opera House’s Live Cinema Season:

‘I recently saw the screening of The Royal Ballet’s Manon and I couldn’t believe how close up the cameras get. You never know where they are and when they are going to be on you. Your reactions have to be very precise and you have to always remember to keep focus and stay in character.’

The soprano is one of five young Australian artists currently on the programme, including four singers and one stage director. After completing the programme next year, she hopes to continue her career in Europe, the place she considers to be the home of opera: ‘There is a good response to opera in Australia but it’s not as big and well attended as it is Europe. I would really love to stay here and perhaps come back to Covent Garden in the future and do a larger role.’

Kiandra isn’t the first young Australian soprano to arrive at Covent Garden with a talent for singing Donizetti and bel canto. Sixty-two years ago, another young Antipodean singer arrived at the Royal Opera House to take to the stage for the first time – her name was Joan Sutherland. Within a few short years, the singer dubbed ‘La Stupenda’ took the world by storm. Time will tell how closely Kiandra’s career mirrors that of the great Sutherland’s but one thing is for sure – with such talent, training and drive behind her, she too has every chance of operatic stardom.