The choreographer's top YouTube moments reflect her position at the forefront of British contemporary dance. 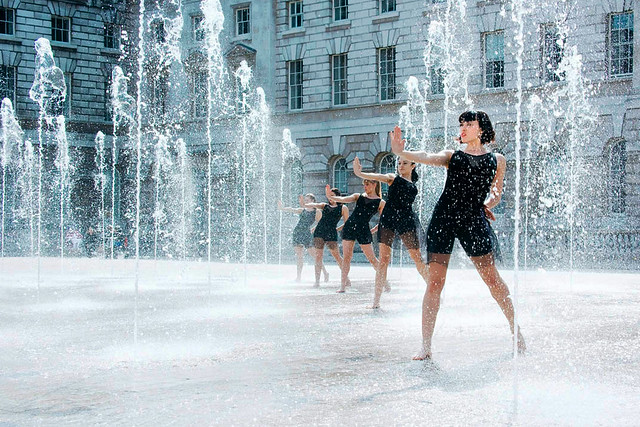 Since founding her award-winning dance company in 1988, British choreographer Shobana Jeyasingh has been at the forefront of contemporary dance – as both creator and advocate. The distinctive vocabulary of the Indian classical dance Bharata Natyam is a continuous thread through Jeyasingh’s choreography, but so too is her desire to meld a variety of dance forms into a unique and eloquent new language.

Jeyasingh makes her Royal Ballet debut with Bayadère – The Ninth Life, a reimagining of the classical ballet La bayadère. The work promises to be a continuation of Jeyasingh’s exploration into dance that can reflect the multiple cultures and histories that make up contemporary city society. We’ve selected a handful of videos that show this fascinating choreographer at work.

Created in 2007, Faultline has become one of Jeyasingh’s most popular works. She was in part inspired by Gautam Malkani’s book Londonstani – specifically the author’s idiosyncratic blend of languages from English and Hindi to textspeak and rap: ‘He’s taken all the languages that are available to a young person and tried to make one hybrid language, and I related with that – because that’s really what I’ve been doing in terms of dance vocabulary, making music out of lots of disparate elements’. The work is also a response to the 7/7 bombings; Jeyasingh later said that in the wake of the attacks ‘it was very difficult to be young, Asian and male and to feel comfortable, so Faultline was a response to that unease’. As with many of Jeyasingh’s works, the piece was created collaboratively with her dancers.

In 2010 Jeyasingh was invited to create a work for the courtyard of Somerset House. She made dramatic use of the space with Counterpoint, for 20 female dancers. To Jeyasingh, the space is ‘quite colonial, very imposing, very grand, very symmetrical… and quite masculine. I wanted to play with those elements as well as contrast them’. The dancers’ saffron orange costumes were another way to create contrast with the imposing surroundings: ‘when I see saffron I think of Buddhist monks, and it has quite a meditative quality about it. I thought that was quite an interesting counterpoint to the building.’

A similar awareness of space guided Jeyasingh’s contribution to the 2012 Venice Biennale – TooMortal is choreographed for church pews. Jeyasingh plays with the ability to hide portions of the body and guide the audience’s vision – much as the eye of the camera does: ‘I think the eye of the spectator has been so conditioned by the way the body is viewed through the camera.’ Once again the female dancers’ bodies form a counterpoint to the formal, straight-edged, hierarchical surroundings.

Collaborations with composers and film-makers is a recurring feature of Jeyasingh’s work (Bayadère – The Ninth Life will be her second collaboration with composer Gabriel Prokofiev). In Bruise Blood she brought together Steve Reich’s acclaimed 1966 work Come Out with live performance from beat-box artist Shlomo. Shlomo’s approach to his art echoes Jeyasingh’s eclecticism: ‘beat boxing takes elements of hip hop culture and modern day dance music or any music… you use experimental vocal techniques to reproduce the entire track, or re-create or create your own’.

For Jeyasingh education is a ‘natural extension’ of her work as a choreographer. Her many projects include Mulberry Blooms, where students from Mulberry School for Girls in Tower Hamlets were encouraged to respond to Jeyasingh’s Strange Blooms, created for her company’s 25th anniversary. Jeyasingh aimed to give the girls an insight into the extensive research that goes into every work, and more generally into the activities of a professional artist. ‘I think any kind of exercise that helps people make creative decisions and be valued in doing that is an incredibly empowering activity.’

Bayadère – The Ninth Life runs 25–8 March 2015. Tickets are sold out, but returns may become available.