Watch: Behind the scenes on Donizetti's Lucia di Lammermoor 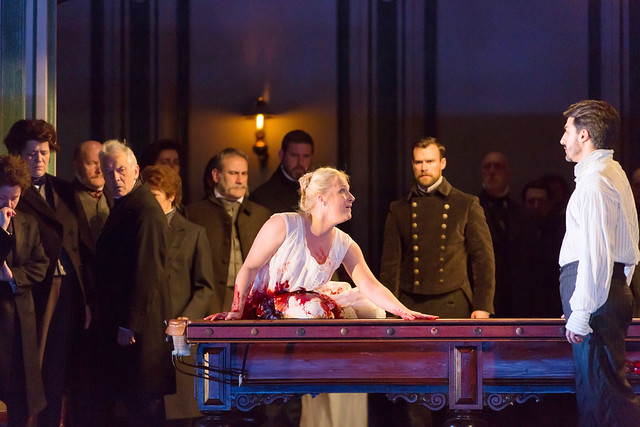 Katie Mitchell’s Royal Opera production of Donizetti’s Lucia di Lammermoor was relayed live to cinemas around the world on 25 April 2016.

During the interval audiences saw several short films featuring interviews with the cast and creative team as well as footage of the opera in rehearsal.

If you missed the screening or simply want to watch them again, here’s another chance to watch the films:

The power of the female in Lucia di Lammermoor:

‘The main themes of this opera are love, death and despair,’ says Katie Mitchell who directs The Royal Opera’s new production of Donizetti’s tragedy.

Mitchell is joined by the cast of her latest production to introduce the story of Lucia – an aristocratic woman who is forced to marry a wealthy landowner after she falls in love with her brother’s enemy.

‘It’s a very demanding, frightening role but it is fantastic', says German soprano Diana Damrau who sings the title role. 'She fights like a man. She does not give up.’

This new production is a feminist take on Donizetti’s opera and focuses the audience’s attention on the central female character.

‘I’m excited to take an opera like Lucia and make it live for women and indeed men today, which gives more sense of the power of the female – as a opposed to being seen as a female without power,’ explains Mitchell.

The sound of the ‘mad scene’ – the glass harmonica:

The glass harmonica is the unusual instrument used to create the eerie sound of the ‘mad scene’ – the moment Lucia realizes that she can never be reunited with her lover Enrico.

‘I use still cold, still [tap] water because it produces the best effect. Mineral water doesn’t really work.’ The best tone and dynamic is produced with cold water,’ says Marguerre.

The instrument also known as a ‘bowl organ’ or a ‘hydrocrystalophone’ can play a huge range of notes from a C1 to an E Flat which allows the player to follow melodies or more polyphonic music.

‘Donizetti searched for a sound that could describe Lucia’s madness’, explains Marguerre. ‘For this opera he wanted an uncanny, crazy sound.’

The next live relay during the 2015/16 Live Cinema Season will be The Royal Ballet’s Frankenstein on 18 May 2016. Find your nearest cinema and sign up to our mailing list.