A collection of classic performances from the conductor before his return to Covent Garden for Dialogues des Carmélites. 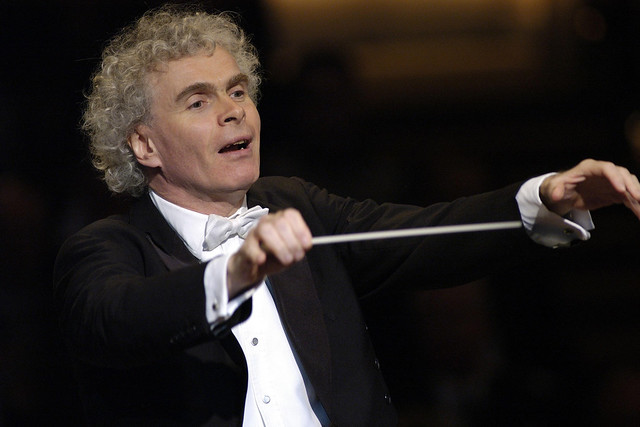 In May and June 2014 Simon Rattle returns to the Royal Opera House to conduct Poulenc's exquisite Dialogues des Carmélites.

Through his collaborations with the City of Birmingham Symphony Orchestra and the Berlin Philharmonic Rattle has become one of the most celebrated orchestral conductors working today. In celebration of his return to the Royal Opera House after a seven-year absence, we've collected together some of our favourite YouTube videos of Rattle that display his versatility and passion.

Rattle brilliantly conducts key pieces from the concert repertory. Here he conducts the Berlin Philharmonic in an extract from the last movement of Beethoven's Ninth Symphony:

But he has also made it his mission to promote less familiar music, and has championed the works of Sibelius. Here he conducts Sibelius's Seventh Symphony in full, with the Royal Danish Orchestra:

During his long partnership with CBSO Rattle made many iconic recordings, and also supervised the orchestra's move to the stunning Symphony Hall. Here is his 1998 farewell performance with the orchestra in full, in Mahler's Second Symphony with soloists Hillevi Martinpelto and Anne Sofie von Otter:

Rattle regularly conducts Stravinsky's thrilling The Rite of Spring in concert – but here he and the Berlin Philharmonic join in a unique collaboration with dance schools from around Europe, with choreography by Royston Maldoom:

The conductor clearly relishes these innovative projects. With Peter Sellars has created unique stagings of Bach's St Matthew Passion (2010) and St John Passion (2014), and in summer 2014 he brings the St Matthew Passion to the BBC Proms with an all-star cast. Here he and the Berlin Philharmonic perform an excerpt from the original production:

Rattle is famous for his interpretations of French 20th-century repertory, and here introduces Ravel's dream-like opera L'Enfant et les sortilèges, in a recording with the Berlin Philharmonic:

Rattle has been a Principal Artist of the Orchestra of the Age of Enlightenment since the early 1990s. He conducts them in Classical and Baroque repertory but also in later music, bringing their period expertise into a new soundworld – as here, in a concert performance of Das Rheingold, the first opera in Wagner's epic Ring cycle, in Baden-Baden:

Rattle is a founding member of the Birmingham Contemporary Music Group and supports the playing of contemporary music. Here he extends that interest back to Ligeti, in a performance of the composer's brilliant Mysteries of the Macabre with Barbara Hannigan:

The conductor has long been interested in music from the USA and has produced several great recordings of Gershwin's Porgy and Bess. Here he conducts on the soundtrack from a film based on Trevor Nunn's 1986 Glyndebourne production, starring Willard W. White and Cynthia Haymon:

We should never forget Rattle began his career as a percussionist. Here he plays the timpani and conducts in the opening of Siegfried Matthus's Konzert für fünf:

And finally, here he is with the London Symphony Orchestra and very a special guest artist at the Opening Ceremony of London 2012.

What have been your favourite Simon Rattle performances and recordings?

The production is given with generous philanthropic support from Mrs Aline Foriel-Destezet, The Taylor Family Foundation and The Calouste Gulbenkian Foundation. The original production is from De Nederlandse Opera, Amsterdam.