Turn off your mind, relax and float downstream: Rethinking opera's approach to death 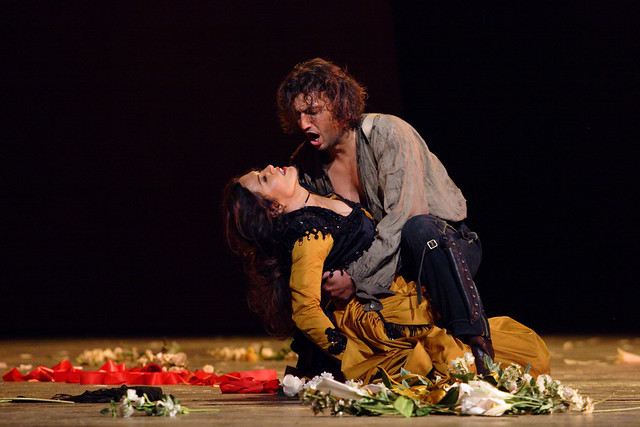 Death is one of the few universal experiences, and it’s not surprising that it makes its presence felt in opera. Generally it is characters’ attitudes to death, rather than the actual experience of it that has fascinated composers. In the case of composer Georg Friedrich Haas's new opera Morgen und Abend, however, it is the process of (rather than the emotional responses to) dying that is of interest.

In the history of the art form, opera’s deaths are often brutal and quick. Manrico in Il trovatore is dragged to execution with barely a moment to think, while Canio’s onstage attack in Pagliacci comes as a savage shock to his wife Nedda. Tosca’s suicide is also swift, though she has time to express her defiance, and anticipate a final confrontation with Scarpia in the next life.

But death doesn’t always come swiftly. Violetta knows she’s doomed for most of La traviata, and in her beautiful Act III aria ‘Addio, del passato’ accepts her fate – though Verdi also poignantly shows us how the return of her lover Alfredo soon after makes Violetta yearn for recovery. Carmen has no such hesitation: she is fatalistic from the moment she foretells her death in the cards, and in her final confrontation with Don José refuses to compromise her integrity or struggle against destiny, bravely declaring that that ‘Carmen will never yield – free she was born, free she will die!’

By contrast, Boris Godunov dies an anguished, guilt-ridden death, convinced that God is punishing him for the murder of the Tsarevich Dmitry. In the opera’s final scene he bids his son farewell, to music that initially seems serene but grows agitated as Boris contemplates death. Eventually his voice shifts into harsh, unaccompanied speech as he urgently pleads for forgiveness in one of the bleakest of operatic finales.

Boris is terrified of death, but other operatic protagonists view it as a release from an unbearable life. Massenet’s Werther commits suicide to end his torment at loving a married woman. His death scene – in which his beloved Charlotte finally admits she loves him – is the only time in the opera that he is happy. Lucia di Lammermoor eagerly anticipates a heavenly reunion with Edgardo in her mad scene, while Elisabeth in Tannhäuser pleads in her Act III aria to be allowed to die, and save Tannhäuser’s soul by her intercession from Heaven.

Haas and Jon Fosse’s treatment of death in Morgen und Abend is different from all of these. Their protagonist Johannes does not meet a violent death; he neither longs to die (despite his widowed state) nor fears death – in fact, he isn’t even aware that he is dying. Instead, he passes almost unconsciously from one state to another, leaving behind his beloved daughter Signe, but re-united with his dead wife Erna and best friend Peter, who gradually guide him to the next life.

‘Morgen und Abend is a standard opera: it’s a man, singing, dying’, explains Graham Vick, who directs the production. ‘Half the repertoire goes like that. But it’s a much more sophisticated version because it’s looked at from the point of view of not leaving life but of arriving at death. You know the light at the end of the tunnel – it’s looked at from the other end. It’s a fantastically ambitious score from that point of view.’ Out of the many operas that deal with death, this extraordinary work is perhaps the only one to examine the state of dying – and what might happen afterwards.