The secret world of the opera prompter

Secretly mouthing the singers' cues from a cramped, hidden box, the job of a prompter is often unfairly overlooked. 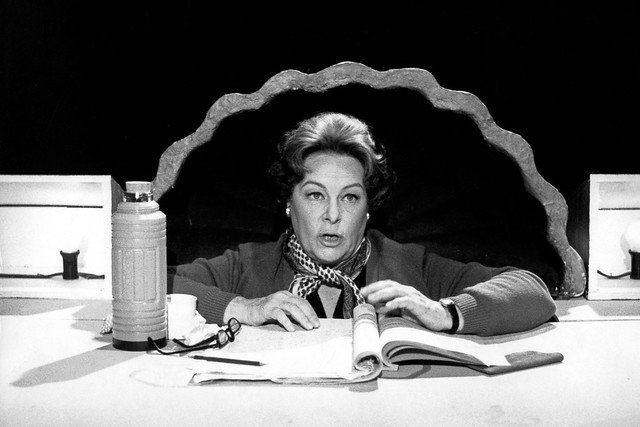 During a performance, if you can take your eyes off the stellar singers and stagecraft, look a little closer. Very occasionally, hidden on the lip of the stage, peeping up from the orchestra pit, you might catch a glimpse of one of opera's most hidden (and to unfamiliar eyes, peculiar) features: the prompter's box.

It's a fairly thankless task, with a unforgiving job description: you must be prepared to spend up to five hours in a small, cramped box mouthing the words to an opera accompanied by constrained hand gestures. You'll have to delicately navigate the conductor's relationship with the singers. And you'll need to wear old clothes, as dust may be kicked in your face by the singers’ feet.

On the plus side, much like the fabled homeworkers who have Skype meetings in their underwear, your outfit is probably the least of your concerns: the singers only see a head and pair of hands popping up from the prompt box, which is recessed into the stage and is designed to be as subtle as possible. Despite this, the prompter’s box is often disliked by modern directors and designers whose concepts and set designs often don't allow for a hidden hatch. It is not feasible for operas with large orchestras – in fact, in a departure from 50 years ago when every performance was prompted, prompters at the Royal Opera House are a rarity, only used for occasional performances. They remain more commonplace in the US and mainland Europe.

It should also be noted that prompting is a potentially perilous pursuit. The opera world abounds with stories of the occupational hazards and humiliations endured by prompters. There was the time that one tenor tumbled into the prompter’s box during a performance and had to pull himself out using the stage curtain. Or when a prompter was so engrossed in the improvisation of the singers she was supposed to be prompting that she forgot to prompt – until she heard her name included in their improvised singing.

Potential hazards aside, the prompter's job sounds simple enough: to keep the singers in time. They use a combination of hand gestures and subtle sounds to provide the singers with cues.

But, of course, it's not as easy as that. Each prompter develops his or her own style which may include using an index finger pointing up to indicate flat pitch or a palm held up to stop. Although prompters don’t sing along audibly they may make a sound with their lips (like smooching the air) at key moments or say the first couple of words of key phrases with the implications of rhythm to help singers with entries.

Prompters are highly skilled musicians. To be successful in the role you need to know the opera inside out, have outstanding musicality, sense of tempo, timing, tact and a cool head in a crisis. Also fluency in Italian and other staple repertory languages is preferred. In fact, many young conductors use the prompter's box as a training ground for their future career, as both prompting and conductors use similar techniques.

'Prompting is something you have to do if you want to be a conductor', says up-and-coming conductor and former Jette Parker Young Artist Jonathan Santagada. 'It’s like conducting off-stage. If you want to be an opera conductor you need these skills in your bag. Otherwise you don’t understand the machine, because opera is so big and so complex. So it’s important to do these difficult jobs so that you’re ready.’

Prompters are involved in the whole rehearsal process to get to know the singers and learn the conductor’s interpretation of the music. It also gives them a chance to study the singers’ weakness so they can anticipate mistakes and coach accordingly. But as any prompter will tell you, if a singer hasn’t learnt their part properly no amount of prompting can save their performance.

Still, in many opera houses around the world, prompting is still a full-time position treasured by the people who do it. And despite the long hours and cramped conditions, it's easy to see why: ‘You build a special relationship with the singers because they trust you. It’s quite something', says Santagada. 'You laugh or cry along and ultimately feel part of the show.’

For a close-up, money-can't-buy view, the prompter's position is unrivalled: 'You can feel everything. It’s like being on stage. You can really hear the singers breathing, struggling, everything. It’s incredible', says Santagada.

And at the end of the performance, although they're not part of the curtain call, the prompter may be rewarded for their marathon stint in a cramped, dusty box with the ultimate acknowledgement: the reflected applause of the singer they've coached through the previous three or four hours. If they're lucky, they may receive a hint of subtle applause or a blown kiss – a fitting public acknowledgement of a true hidden talent.