The programme features an exciting range of new commissions, world premieres and much-loved revivals, supported by a diverse range of ticketed and free daytime events, activities and festivals for people of all ages. 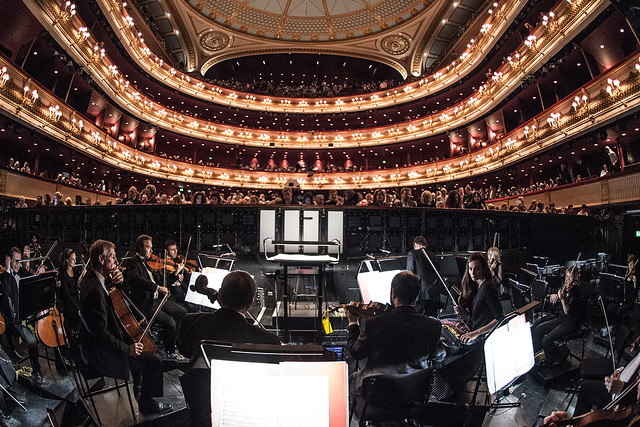 The view from the main stage Orchestra Pit at the Royal Opera House © ROH/Sim Canetty-Clarke, 2014

The Royal Opera House has launched its 2019/20 Season, unveiling an exciting range of new commissions, world premieres and much-loved revivals, supported by a diverse range of ticketed and free daytime events, activities and festivals for people of all ages.

In the first full Season since the completion of the Royal Opera House’s three-year Open Up renovation, The Royal Opera unveils a host of innovative new work, with 13 new productions, including two world premieres, in the Season ahead.

Building on the success of 2019’s Berenice, The Royal Opera’s Director of Opera Oliver Mears brings more Handel to the Company’s repertory with Barrie Kosky’s new production of Agrippina. Handel performances continue with the Jette Parker Young Artists taking centre-stage in a brand-new co-production of Susanna, performed in the West End’s newest and most intimate space, the Linbury Theatre as part of the 2020 London Handel Festival.

The Company continues to build on the success of Billy Budd by staging two Britten masterpieces. David McVicar directs a new production of Britten’s last opera Death in Venice, and Natalie Abrahami and Michael Levine stage a new production of one of the composer’s best-loved operas, The Turn of the Screw, in the Linbury Theatre.

Building on the huge success of Kát’a Kabanová, The Royal Opera stages the third opera in its Leoš Janáček cycle, Jenůfa, directed by the award-winning Claus Guth with a stellar cast that includes Asmik Grigorian, who makes her Royal Opera debut, and Karita Mattila as Kostelnička.

In a co-commission between the Guildhall School of Music & Drama and The Royal Opera, composer Matt Rogers and librettist Sally O’Reilly bring the world premiere of She Described It To Death to the Linbury stage.

The Jette Parker Young Artists Programme welcomes five new singers and one stage director onto the Programme for the 2019/20 Season: their work will showcase world-class talent at its best, both in the Linbury Theatre and on the main stage.

The Royal Ballet draws on its rich cultural heritage while embracing the diverse and contemporary in its 2019/20 Season. The Company unveils five new productions, including four world premieres and including new co-productions and commissions. The Company will celebrate international partnerships with celebrated and award-winning artists and companies from across the globe.

The Royal Opera House’s programme of free and ticketed daytime festivals, activities and events encompasses almost 200 separate events over the course of the Season, and will include free lunchtime performances, the continuation of its popular Opera and Ballet Dots programme (for children aged three months to five years) as well as 11 Family Sundays, which welcome diverse new audiences to our art forms.

The Royal Opera House’s national learning programme, which has engaged more than 35,000 students, 531 schools and 1,255 teachers across the country so far this Season, has bold ambitions for 2019/20. The Royal Opera House will partner with Doncaster through ‘Doncaster Creates’ (Doncaster’s Culture Development programme), Cast (Doncaster’s £22m performance venue) and Doncaster Metropolitan Borough Council. Through the ROH National Learning Programme, the Royal Opera House will work with every school in Doncaster over three years, putting on a mass community engagement performance in summer 2020. Alongside this, The Royal Ballet will perform a gala in Doncaster, and the ROH’s popular Chance to Dance talent development programme will also continue.

Cinema highlights include: The Royal Ballet’s Coppélia, Sleeping Beauty and Swan Lake, and opera broadcasts featuring world-renowned opera stars such as Jonas Kaufmann (in Fidelio), Bryn Terfel (in Don Pasquale) and Nina Stemme (in Elektra). The Royal Opera House will also share three of its world-class productions free of charge through the hugely successful BP Big Screens, with full details and titles to be announced later this year.