Opera in the City of Love: Paris as muse

Composers have been inspired by everything about the French capital – from its seediness to its troubled political history – but most of all by its air of romance. 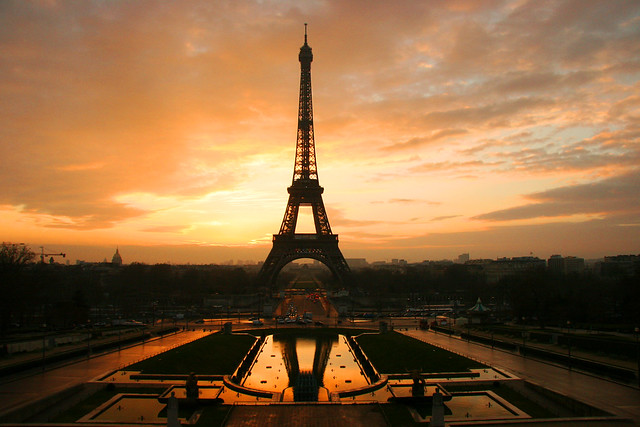 ‘Ah! How delightful to leave the dreary countryside for Paris, beautiful Paris that Love must have created!’ wrote the poet Guillaume Apollinaire. The image of Paris as the city of love has inspired countless novels and films – and operas, too, though not always for reasons of romance…

Take the city’s troubled political and religious history, inspiration for several great operas. Meyerbeer’s 1836 opera Les Huguenots focusses on the conflict between Protestant Huguenots and Catholics and culminates in the 1572 St Bartholomew’s Day Massacre. Sixty years after Meyerbeer, Giordano was drawn to the French Revolution for Andrea Chénier. Both composers take care to depict local and period colour: Meyerbeer frequently refers to the Lutheran chorale ‘Ein’ feste Burg’, and opens Act III with lusty choruses sung by Parisian pleasure-seekers, and Giordano weaves the Marseillaise and other Revolutionary songs into his score. But the principal focus of both operas is the impact of politics on young lovers: Meyerbeer’s Protestant Raoul and Catholic Valentine, and Giordano’s poet Chénier and aristocrat Maddalena di Coigny, who – in both operas – choose to die together heroically rather than capitulate to a brutal regime.

Paris’s reputation as the hub of thrilling theatre has also inspired several composers. Cilea vividly depicted the bustle of backstage life at the Comédie-Française in Adriana Lecouvreur, his heroine inspired by the great 18th-century actress Adrienne Lecouvreur. He mixed fiction (a play by Eugène Scribe and Ernest Legouvé) with a few facts about the real Adrienne to create a memorably dramatic plot – which ends with Adriana’s death after she receives a poisoned bouquet sent to her by an aristocratic rival in love. Richard Strauss offered a rather more positive view of theatrical patronage in Capriccio (which also contains a character modelled on a real 18th-century French star actress, La Clairon), where his heroine Countess Madeleine and her stage-struck brother genuinely love the arts.

During the 18th and 19th centuries Paris became famed for its courtesans; as a consequence many operatic heroines have found themselves corrupted there (especially if they’re called Manon). Massenet’s Manon becomes a vain coquette once she’s entered the Parisian demi-monde: she exults in her own beauty in her Act III Gavotte and encourages Des Grieux into a life of vice in the hectic gambling scene. In the Parisian Act II of Puccini’s Manon Lescaut the once-innocent heroine is depicted as a pampered and bored kept woman. Henze’s Manon in Boulevard Solitude evolves into a vulgar tart and ultimately becomes a cold-blooded killer. On the other hand, in Verdi’s La traviata the brash music for the party scenes contrasts with Violetta and Alfredo’s lyrical sincerity and their longing to leave Paris for a simpler life in the country.

Despite its reputation for corruption, Paris has played host to some of the most enjoyable operatic parties take place in Paris. These include Hanna Glawari’s ball in Lehár’s Die lustige Witwe (where she transforms her house into an imitation of Maxim’s restaurant), Offenbach’s ebullient champagne supper and masked ball in La Vie parisienne and the joyous Christmas Eve celebrations in Act II of Puccini’s La bohème (which Debussy claimed brought 1830s Paris perfectly to life).

Finally, there’s no doubt that Paris has inspired some of opera’s most tender love music. The city provides the perfect romantic backdrop to Manon and Des Grieux’s amorous duet in Act II of Manon, Louise’s ecstatic aria ‘Depuis le jour’ in Act III of Charpentier’s Louise, Ruggero and Magda’s toast to love (‘Bevo al tuo fresco sorriso’) in Act II of Puccini’s La rondine and, perhaps greatest of all, Rodolfo and Mimì’s growing attraction in Act I of La bohème. No matter how critical opera composers may be of Paris, its romantic ambience is as irresistible for them as for anyone else.

Manon Lescaut runs from 22 November–12 December 2016. Tickets are still available. This is a co-production with Shanghai Grand Theatre.