Our quick introduction to the UK premiere of the latest work from one of today’s leading composers. 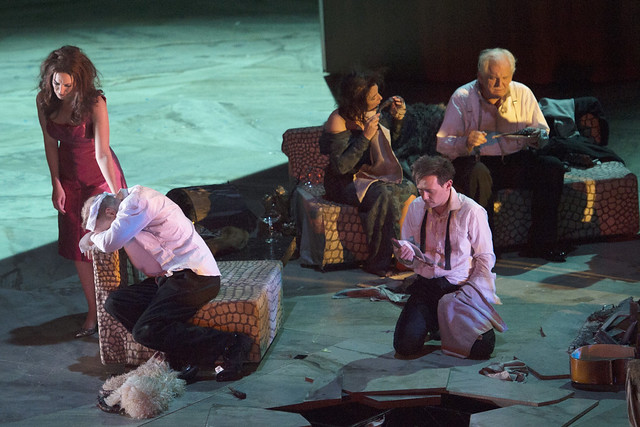 Lucía and Edmundo de Nobile are hosting a dinner party for 12 friends. Events soon take a strange turn: the servants unaccountably leave the mansion one by one, and at the end of the evening the guests linger in the music room, seemingly unable to depart. By morning it is clear that no one can leave the room. Will they ever get out?

The Exterminating Angel is Thomas Adès’s third opera. His first, Powder Her Face (1995), explored the scandalous life of Margaret, Duchess of Argyll, and was performed to acclaim at the Royal Opera House in 2008 and 2010. His second, The Tempest (2004), based on Shakespeare’s play, was commissioned by The Royal Opera, and has since been performed by many of the world’s leading opera houses, including the Metropolitan Opera, New York. His third opera’s subject reflects his interests in Surrealist art and film.

The master of Surreal satire

The Exterminating Angel is based on Luis Buñuel’s 1962 satirical film El ángel exterminador, filmed in Mexico following the scandalous reception of Buñuel’s Viridiana in General Franco’s Spain. Buñuel uses a lavish dinner party as the catalyst for a critique of human savagery, class conflicts, bourgeois inertia and religious hypocrisy. He wittily draws on his early experiences of Surrealism to give the film a hallucinatory and darkly comic quality, with strange dream-sequences, and the participation of a bear and a flock of sheep.

Adès’s score is a fascinating collage of different musical styles. Particularly notable are the increasingly distorted Viennese waltzes (which Adès associates with elegant social ritual and its gradual dissolution), the thundering drums in the Act I interlude (based on a Holy Week ritual from Buñuel’s home town), the piano variations in Act I based on a Ladino song and Leticia’s virtuoso coloratura aria in Act III, a setting of a 12th-century text by the philosopher-poet Yehuda Halevi. The eerie sound of the ondes martenot represents the strange force that keeps the guests trapped in the room.

Thomas Adès and his librettist Tom Cairns condense some of Buñuel’s action and amalgamate several characters, yet remain remarkably faithful to the film’s scenario – even to the arrival of the bear and sheep. Hildegard Bechtler’s designs combine the film’s art deco glamour with a stark set whose towering arch represents the threshold between the guests’ captivity and the outside world.

The Exterminating Angel runs 24 April–8 May 2017. Tickets are still available.

The production is a co-commission and co-production with Salzburg Festival, the Metropolitan Opera, New York, and The Royal Danish Opera, and is given with generous philanthropic support from Stefan Sten Olsson, The John S. Cohen Foundation and The Boltini Trust.