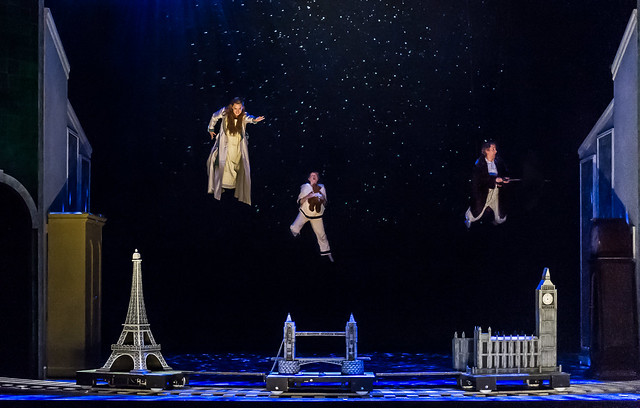 Peter Pan is a boy who refuses to grow up. When he loses his shadow, Wendy Darling helps sew it back on. Peter then convinces Wendy and her brothers John and Michael to come with him to Neverland, where Wendy can be a mother to his troupe of Lost Boys. In Neverland they have countless fantastic adventures, and help Peter fight the fiendish pirate Captain Hook; Hook has had it in for Peter ever since he fed his arm to a crocodile. John, Michael and the Lost Boys soon they realize that they want to go home to Mr and Mrs Darling – but can they convince Peter to join them?

Scottish writer J. M. Barrie won fame for his fiction and plays soon after he moved to London in 1885. He had his greatest success with his 1904 play Peter Pan, which broke box office records and became a permanent staple of London Christmas theatre for the next 30 years. Peter Pan’s popularity has proved permanent: after Barrie’s own adaptation of the play into a novel, Peter and Wendy, in 1911 there have followed innumerable books, comics, films and stage works, making Peter Pan one of the mostly widely recognized characters in children’s literature. Barrie bequeathed the copyright of Peter Pan (and the considerable proceeds from these adaptations) to Great Ormond Street Hospital for Children.

When composer Richard Ayres was commissioned to write a new opera for Oper Stuttgart, Peter Pan was his first thought: ‘I wanted to make something that I could take my eight-year-old daughter to, that both she and I would enjoy’. His librettist, poet Lavinia Greenlaw, was less certain, concerned about the character’s familiarity. ‘And then I started thinking about all the things I object to in other people’s interpretations of the story… I wondered why it was that this particular story is one that we hang onto from our childhood. That led Richard and me into conversations about family and home and how we perpetuate and sometimes detonate those structures. And from there I became interested in J.M. Barrie and why he wrote it; how the work evolved. By then I realized that I was committed to the idea.’

The Boy who Never Grows Old

Barrie’s eternal child has inspired numerous different readings. Ayres was intrigued by what it is that makes the difference between being a child and being an adult. 'There’s a lack of inhibition in children that makes it possible for them to get caught up in a vividly exciting imaginary existence', he says. 'That’s something that creative artists have to find again for themselves.’ For Greenlaw, ‘the refusal of Peter to grow up is the refusal to develop empathy. He has an animal-like quality, a detachment, that can make him appear callous’. In their opera, this ageless character is sung by a counter-tenor – a voice Ayres was drawn to for its ‘ungendered, ageless and strange’ qualities.

This new production of Ayres and Greenlaw’s Peter Pan, directed by acclaimed British director Keith Warner, was commissioned by Welsh National Opera as part of their ‘Terrible Innocence’ season, alongside Debussy’s Pelléas et Mélisande and Mozart’s The Magic Flute. WNO’s Director David Pountney believes Peter and Mélisande are characters of ‘enormous charm, beauty, grace and, apparently, innocence’; their abilities to live beyond the rules has the power ‘to cause destruction and mayhem among those of us whose lives are governed by more prosaic realities’. WNO’s performances of Peter Pan at the Royal Opera House come in the second year of a new partnership between the two companies, which saw performances of Schoenberg’s Moses und Aron in 2014 and will see the London premiere of Iain Bell’s In Parenthesis in summer 2016.