Opera Essentials: Everything you need to know about Puccini's La bohème 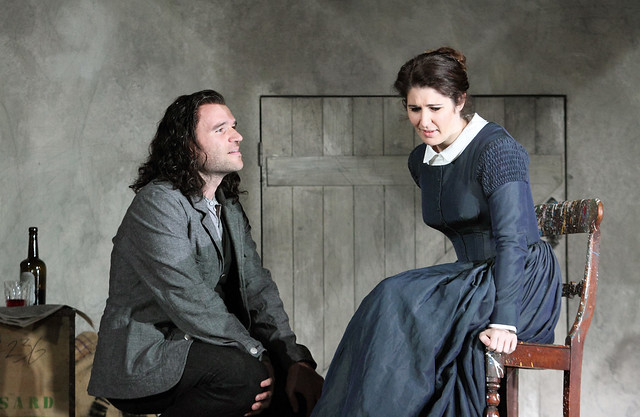 When penniless writer Rodolfo meets young seamstress Mimì, they quickly fall in love. But as it dawns on Rodolfo that Mimì is gravely ill with tuberculosis, will he leave her or stay?

What is a Bohemian?

The term ‘bohemian’ has been used since the mid-19th century to describe artists who live unconventional lives on the fringes of society, usually in poverty, and with an emphasis on free love. There has been much debate about whether bohemianism’s focus is more on an unorthodox lifestyle than on serious creative endeavour. In his opera, Puccini leaves us to decide whether the young men in La bohème are merely bourgeois drop-outs playing at being artists, or whether their artistic intentions – and their romantic relationships – are serious.

Puccini began to plan an opera based on the French writer Henri Murger’s stories Scènes de la vie de bohème (Scenes of the bohemian life) in 1893. Unfortunately his friend Ruggero Leoncavallo was contemplating an opera on the same subject, and claimed he’d thought of the idea first. Puccini issued a challenge: the public could decide which opera they preferred. Although Leoncavallo’s La bohème initially had better reviews, the public preferred Puccini’s.

Love and Death in Bohemian Paris

Murger’s Scènes de la vie de bohème is a series of short stories, closely based on the author’s own experiences. The tone is generally satirical; only two of the stories are tragic. Scènes de la vie de bohème was published as a book in 1851. Murger and his friend Théodore Barrière also wrote a successful melodramatic play loosely based on the stories. Puccini drew on a limited amount of material from Murger’s stories and play, making many alterations to the plot, focusing more closely on a central romantic relationship and making the principal characters more sympathetic.

La bohème is famous for its beautiful arias and duets, above all Mimì and Rodolfo’s arias and duet in Act I, and Musetta’s Act II Waltz Song. It also contains some wonderful evocations of Parisian life, including the hustle and bustle of Christmas Eve in the street outside the Café Momus and dawn on a winter day on the outskirts of the city.Puccini used recurrent motifs to poignant effect throughout the opera, particularly in Mimì’s death scene, as she recalls her first meeting with Rodolfo in Act I.

It is a co-production with Teatro Real, Madrid and Lyric Opera of Chicago. It is staged with generous philanthropic support from Mrs Aline Foriel-Destezet, Mrs Susan A. Olde OBE, Beth Madison, The Royal Opera House Endowment Fund and The American Friends of Covent Garden.

This article has been categorised Opera and tagged by Richard Jones, essentials, La bohème, Production, Puccini