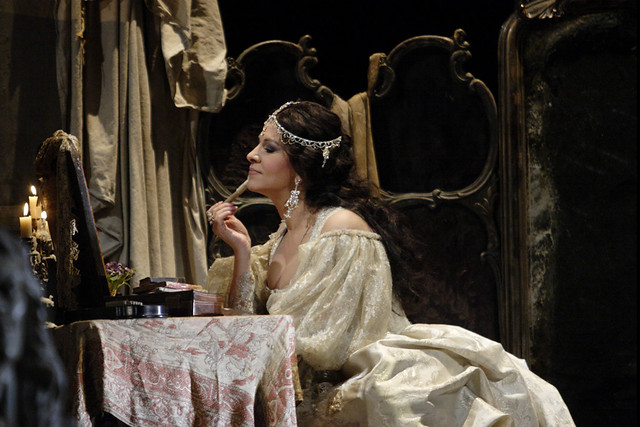 Count Maurizio and the beautiful actress Adriana Lecouvreur fall passionately in love. But their affair is threatened not only by their mutual preoccupation with their respective careers, but by the furious jealousy of the Princesse de Bouillon, Maurizio’s cast-off mistress.

The real story of Adriana

The title role of Cilea’s opera Adriana Lecouvreur is inspired by the 18th-century French actress Adrienne Lecouvreur, one of the greatest tragic actresses of her era, particularly known for her interpretations of Racine’s heroines. While Adrienne did indeed have a long-term love affair with Maurice of Saxony (who had also attracted the attention of the young Duchesse de Bouillon) it is thought that her early death – despite rumours of poisoning – was from natural causes.

Adriana Lecouvreur was the only successful opera by Francesco Cilea, a contemporary of Puccini who, unlike many Italian composers of his generation, was not particularly drawn to verismo opera. Adriana’s premiere in November 1902 at the Teatro Lirico, Milan, met with acclaim from public and press alike, not least because the great tenor Enrico Caruso was singing Maurizio. The opera soon toured internationally, and in recent years has re-entered the regular repertory.

The world of the theatre permeates the drama of Adriana Lecouvreur. In Act I, Cilea captures the pre-performance bustle of the Comédie-Française, while Adriana’s first aria ‘Io son l’umile ancella’ is a paean to emotional truth in art. In Act III, the subject of the ballet – the choice of Paris – reflects Maurizo’s choice between Adriana and the Princesse, while Adriana uses a speech from Racine’s Phèdre – moving chillingly from song into speech – to denounce her rival.

The importance of the theatre for Adriana is reflected David McVicar’s production, with intricate sets by Charles Edwards. Act I’s set – a replica of an 18th-century theatre – returns in different guises in each act, making theatre’s presence keenly felt. In Act IV, the gaunt shell of the theatre conveys Adriana’s desolation at Maurizio’s supposed betrayal.

The production is a co-production with Gran Teatre del Liceu, Barcelona, Vienna State Opera, San Francisco Opera and Opéra National de Paris, and is given with generous philanthropic support from The Friends of Covent Garden.

This article has 5 comments