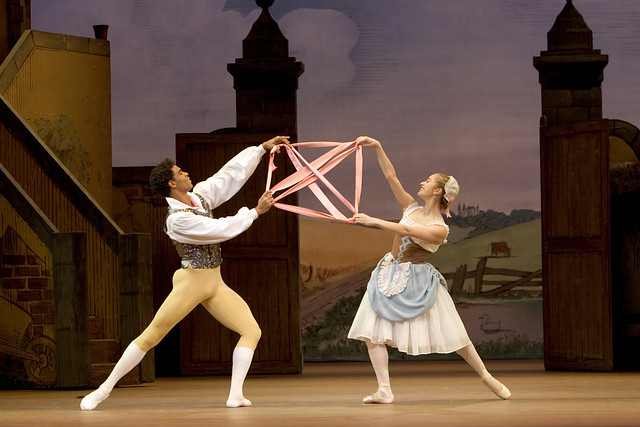 Since its premiere in 1960, Frederick Ashton’s La Fille mal gardée has become one of his best-loved works, and a quintessential example of the English style that Ashton developed with The Royal Ballet. And yet the ballet’s title hints at its more distant, French origins: it was first created by Jean Dauberval in Bordeaux in 1789, and has since inspired hundreds of ballets around the world. Ashton drew on many aspects of these international wayward daughters to create his own very English masterpiece.

One of his most inspired touches was the expansion of the ballet’s ribbon motif. The use of a ribbon as a prop in Fille can be dated back at least to an 1803 Paris production, but Ashton was most influenced by its use in the popular 1885 Russian version by Marius Petipa and Lev Ivanov. The great Russian ballerina Tamara Karsavina, who had suggested Fille to Ashton in the first place, had danced the Petipa/Ivanov version countless times and passed her knowledge on to Ashton. He transformed the motif into a poetic metaphor for love, which recurs throughout the work – perhaps most famously in the charming pas de ruban.

The young lovers Lise and Colas have so far spent much of the ballet trying to escape Lise’s cantankerous mother, Widow Simone. Finally, they manage to meet alone. In their ensuing pas de deux – which, as in the 1803 version, features the ribbon that Lise had earlier left tied in a lover’s knot for Colas – Ashton brilliantly expresses their feelings for one another.

At first, Lise feigns shyness and teases Colas, tying the ribbon around his wrists so that he can’t disturb her butter-churning. But she can’t resist him for long; catching hold of the end of the ribbon, she and Colas take turns coiling towards each other in a flurry of chaînés that pay homage to the Petipa/Ivanov Fille and Petipa’s Kingdom of the Shades scene in La Bayadère. Now united, the lovers perform a series of identical steps before joyfully circling round one other, Lise at last giving Colas her full attention.

They playfully take it in turns to play the horseman and the filly, prancing around with a mixture of pas de cheval, pas de chat, trots and gallops. Quickly, however, this frivolous mood subsides as a radiant string melody signals the beginning of an adage. Colas pulls the two ends of the ribbon, binding Lise more tightly to him as they lean back against one another’s weight. He supports Lise in a series of arabesques penchés – demurely using the ribbon to hold her.

Knotting the ribbon and entwining themselves even tighter, they draw it up over their heads, creating an intricate cat’s cradle. Colas then translates this ‘x’ into a real (but charmingly chaste) kiss of the ribbon, which he presents to Lise. Reeling her in once again, he lifts her high above his head and slowly, proudly rotates her round and round. Bringing her back into his arms, he builds up the courage to sneak a kiss on the lips – but is interrupted by the arrival of Lise’s friends.

This disturbance might bring the pas de ruban to an abrupt end, but it is by no means the end of the couple’s blossoming romance, nor the last time Ashton uses symbolic ribbons. He takes the metaphor to elaborate new levels in the spectacular ‘Fanny Elssler’ pas de deux, in which Lise’s eight friends each hold a long ribbon and create intricate patterns – including rows of kisses and cupid’s bows – around the couple. Ashton’s other ingenious uses of ribbons and knots include the tying and untying of neckerchiefs, symbolizing the making and breaking of commitments and – when love finally prevails – Lise’s wedding dress, which is bound with a criss-crossed white ribbon.