How the Write an Opera course inspires school pupils: ‘They don’t need a talent show judge to tell them they’re great'

The story behind one school’s production, which has empowered them to tour their work. 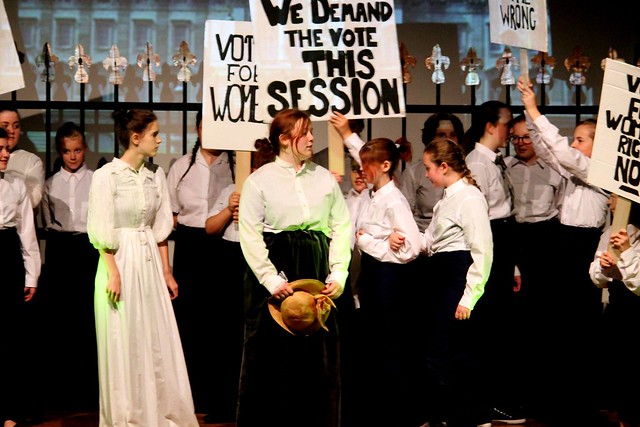 Brave Enough to be Yourself © Donna Howell 2013

A year ago, the pupils of Helenswood Academy, an all-girls school in Sussex, had a very definite idea of what opera entailed: they assumed that they didn’t like the art form and it wasn’t for them. All that changed after their Head of Music, Liz Mason, attended the Royal Opera House’s Write an Opera course last summer and subsequently staged the school’s very own opera.

The Write an Opera course equips teachers with the skills, resources and inspiration to support students’ learning across the curriculum through the arts and creativity. It helps teachers to develop the skills that enable them to stage their own operatic productions with their pupils, who get involved in every aspect of creating the opera: writing music and lyrics, performing on stage and in the orchestra, conducting, designing the costumes, props, scenery and lighting, running the marketing campaign as well as the front of house and stage management side of things.

We spoke to Liz to find out how Write an Opera – which is benefitting from our current Season Appeal – has inspired her pupils:

Liz, could you tell us a bit about the opera and how it came about?

The opera, called Brave Enough to be Yourself was set in the time of World War I to commemorate the centenary year. The opera opened with a suffragette protest and ended with a tragic scene in a French hospital. There was a real buzz in the school as opening night approached – it was so exciting. We even made it onto BBC News!

The only theme we gave the girls was ‘World War I’ and then they developed the story around it. It was a whole school effort, across the year groups – the Modern Languages, Art, Drama and Design Technology departments were all involved and so had an interest in making a success of it. Everyone had a chance to take part.

What was the reaction of the pupils and parents?

There was some initial scepticism from pupils as they assumed they didn’t like opera. Once they got started though, they loved it. They were encouraged to find their own voices and not to sing as they thought opera should sound – there was a real emphasis on finding their own sound and expressing their feelings through it.

Due to the size of the ensemble (at over 200 performers), the cast had to be split in half for the two performances. After the first performance, the singers loved it so much that they wanted to come back and sing on the next night!

The parents were absolutely thrilled and blown away. Lots of them said they were very grateful to have something different to the usual talent show format. It’s been fantastic for the girls to learn that they don’t need a talent show judge to tell them they’re great; they just needed to take part for themselves.

The girls now want to tour with the opera to other schools, and we’re planning to link up with the History Department and will go to Ypres and perform there too. We’ve also been invited to perform Brave Enough to be Yourself again, this time at the De La Warr Pavilion, a local performing arts venue.

How has writing an opera affected the school?

Everyone is proud and excited about the achievement of creating something and performing it. I’ve seen so many pupils blossom; it’s been wonderful. We want to write another opera in 2015/16, but not until we’ve performed Brave Enough to be Yourself a few more times! Next time round we will enlist the pupils who have already been involved to be mentors for the newer pupils. It means that they can support their peers as well as their teachers.

We’ve now also got a small orchestra together, which is something I’ve been trying to develop for a long time. It has been a fantastic experience for all involved.

Find out more about the Write an Opera Course and how you can support it through our Season Appeal.

Write an Opera is generously supported by the Kathleen Hannay Memorial Charity, the Teale Charitable Trust, the Banham Charitable Foundation, and donors to the Season Appeal.

This article has been categorised Learning, Opera and tagged learning, schools, World War I, Write an Opera