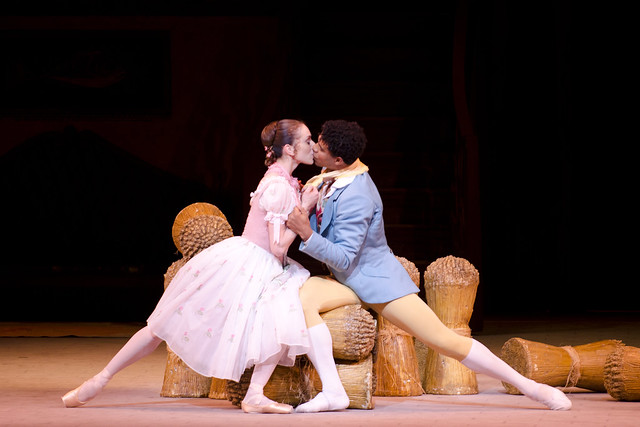 On the dawn of a busy day on the farm, Lise meets her lover Colas. They are interrupted by Lise’s mother, the farm-owner Simone, who is determined that Lise will marry Alain, the son of a wealthy landowner. But Lise and Colas have other ideas…

The first version of La Fille mal gardée was created in 1789 by the French choreographer Jean Dauberval, who is said to have taken his inspiration from an engraving by Pierre-Antoine Baudouin. The work saw many revivals and different adaptations by choreographers, including Filippo Taglioni, Marius Petipa and Alexander Gorsky. In 1959, Frederick Ashton began to create his own staging, encouraged by the Russian ballerina Tamara Karsavina. Combining elements of previous productions with Ashton’s virtuoso choreography, it was an immediate hit at its premiere in 1960, and was described by Marie Rambert as ‘the first great English classic’.

‘There exists in my imagination a life in the country of eternally late spring, a leafy pastorale of perpetual sunshine and the humming of bees – the suspended stillness of a Constable landscape of my beloved Suffolk, luminous and calm… at some time or another every artist pays his tribute to nature: my Fille mal gardée is my poor man’s Pastoral Symphony,' wrote choreographer Frederick Ashton.

Just like the ballet’s choreography, the score for La Fille mal gardée has been adapted for many different productions. For the Ashton version, John Lanchbery turned to the score created by Ferdinand Herold for the 1828 Paris production, which itself drew on the pleasant though largely unoriginal music written for the 1789 premiere. Herold added to some pieces by other composers and some new music, and Lanchbery took a similar approach. He used Herold’s score as a foundation and adding pre-existing music by composers such as Donizetti, as well as passages of his own writing.

The Pas de ruban (ribbon dance), danced by Lise and Colas in Act I, is a beautiful expression of the young lovers’ romance. Colas discovers the lover’s knot left for him by Lise in the form of a pink ribbon. She appears and they dance together using the ribbon to bind themselves together, support one another’s weight and to perform intricate tricks – including a cat’s cradle created by wrapping the ribbon around their bodies.