British conductor Geoffrey Paterson was a member of the Jette Parker Young Artists Programme 2010–12, during which time he conducted Le Portrait de Manon (Meet the Young Artists Week), a scene from Death in Venice (JPYAP Summer Performance) and Hot House (ROH Learning and Participation); was assistant conductor on Les Pêcheurs de perles, Il barbiere di Siviglia, Macbeth, La traviata and Le nozze di Figaro (Royal Opera), Alice’s Adventures in Wonderland and Birthday Offering/A Month in the Country/Les Noces (Royal Ballet) and Ludd and Isis and Beginners (ROH Learning and Participation); and joined the Royal Opera music staff for numerous productions. He has since returned to conduct The Firework-Maker’s Daughter and Gloria – A Pigtale for Mahogany Opera Group and How the Whale Became, Glare and The Corridor/The Cure for The Royal Opera.

Paterson’s awards include first prize at the 2009 Leeds Conductors Competition.

How does Berg use Sprechgesang in Wozzeck? (The Royal Opera) 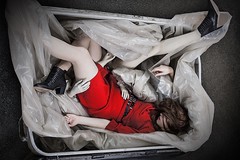 Our quick guide to this ‘robot opera’ that questions what it is that makes us human, and explores themes of trust, reality and loneliness.